I never intended to post another blog entry so soon after my first one, but I have received a number of messages saying that it was nice to see someone writing about an imperfect life so honestly. It made me realise how much we are affected by the way we perceive the quality of other people’s lives and how we would like ours to be perceived. We’ve all seen and ‘liked’ the memes on social media about how Disney gave them false expectations of men, but beyond this, why are so many of us so afraid to admit that our lives and relationships are simply ordinary?

Firstly, I think Disney is being assigned an undue portion of the blame. It may have presented you with princes that carried their brides off into the sunset on horseback, but those kinds of men and that type of scenario aren’t as far-fetched as you might think. The prince in Sleeping Beauty found her asleep, thought she was pretty, gave her a kiss, assumed she was interested and took off with her. If that’s the kind of man you’re after then I have great news! Job Centres all around the country hold fortnightly congregations with many men just like this, so find your nearest one and go take your pick. Also, when Prince Charming’s father decided it was time for him to get married, they arranged a gathering and he was given a choice of any girl in the kingdom. Spurred on by their parents, all the girls competed for this coveted prize and naturally he picked the pretty one that was good at housework. How is that different to how many British Pakistani parents get their sons married? (The kingdom being Pakistan of course)

Part of the problem is, of course, social media. We see other people’s pictures of them out with friends, loved up with partners, looking immaculate, on family-fun days out and think, ‘Why isn’t my life like that?’ While we lay in bed, instead of reading or sleeping, most of us are checking Facebook, Instagram or Snapchat, stalking everyone that allows us to take a glimpse into their lives, clicking on the profiles of people we don’t even know. We forget that these pictures and not statuses are often not as spontaneous as they appear to be nor do they represent a typical day in these people’s lives. They have been specifically selected, edited, cropped and reworded to create the most impact. For every picture uploaded, there are many that have been deleted because the lighting or angle made them look unattractive, a friend had ruined the symmetry by facing the wrong way, the kids looked bored or there was some underwear drying on the radiator in the background. More often than not, the picture posted isn’t evidence of their exceptionally perfect life, but is the exception to their ordinary life.

When I had my now 3-year-old daughter, I remember the first time the health visitor came to see us. As she was leaving and trying to arrange her next visit she said, “I try not to arrange morning appointments for mums that have only just had a baby, but you seem like you’re on top of it, so is 9:30 okay?” Now what I wanted to say was, “ARE YOU INSANE? I went through a 16 hour labour just 3 days ago, I’ve had less than four hours’ sleep, I’m wearing my pyjamas underneath my abaya, I haven’t washed my face or brushed my teeth yet because I set my alarm to go off just 10 minutes before you were due to arrive and that only gave me enough time to hide the dirty laundry and throw the unwashed bottles in the sink! On top of it? On top of what? How about I stick my foot on top of your head! I would have struggled with 9:30 even before I had a baby so, no, 9:30 on Thursday is most definitely not ok!” However, what I actually said was, “Yes, of course, that’s fine.” I remember being really annoyed with myself afterwards for not asking for a later appointment just because she made a flattering judgement about me and I felt that I should maintain it. Had I said how I really felt, perhaps paraphrasing it slightly, I’m almost certain she wouldn’t have judged me or thought anything of it, but I didn’t because I was happy for her to think that I was coping better than I actually was. The staff at my daughter’s nursery also seem to have the same mistaken beliefs about me being a highly efficient and organised mum and I have never said anything to correct them. They always comment on how well presented my daughter is, how advanced she is because of all the things I must do with her and are impressed by the pretty name labels I have attached to all her things. They clearly have no idea of the half hour wrestling match that takes place every day just to get a straight parting in her hair; the amount of shouting that takes place to get the kids in the car on time; that probably half of what she knows has come from watching tv and that I bought iron-on labels because I can’t even thread a needle and, even then, they have been stuck on wonky.

Pictured below is the shameful mass of crumbs that I discovered this morning when I finally remembered to empty the toaster’s crumb tray. The truth is, I am a toaster. I maintain a respectable appearance on the outside and function perfectly well, but inside I am crumbly mess of insecurities, shortcuts, unfulfilled ambitions, exhaustion and mummy guilt. We are all selective over how much of our lives we reveal to other people, and the impression we create of our lifestyles isn’t always 100% true to reality. I am not suggesting that everyone who posts on social media is deliberately falsely representing themselves. A lot of the time, people share things simply because they think their friends would be interested in them and others may genuinely have glamorous social lives (whoop-ti-do for them) or genuinely perfect relationships (double whoop-ti-do). As stay at home mums, our lives centre around our children; on countless trips to the toilet; on talking about wee and poo so much that it’s disturbing; on saying and reading the same thing 50 times a day; on hearing “Mama” so many times that it makes out want to hack your own ears off with a bread knife; on never being able to go anywhere without making a meticulously timed plan that takes account of different nap times, dietary requirements, temperaments and packing for any possible eventuality.  We may not have the most glamorous of lifestyles, but, hey, we are all just crumbs in the same toaster crumb tray. 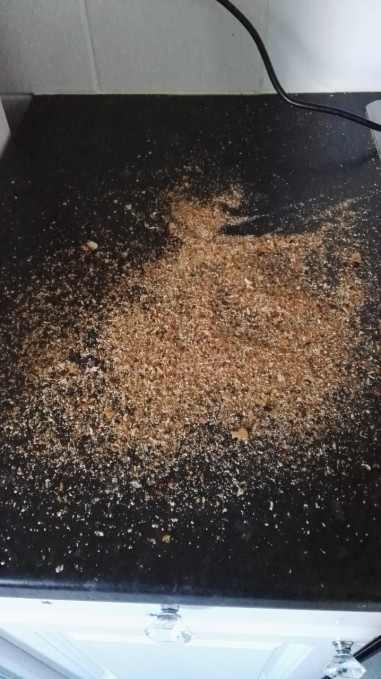 Leave a Reply to Fatima A. (@Blogsbyfa) Cancel reply